The True History of Cozumel Volume 2

The True History of Cozumel Volume 2 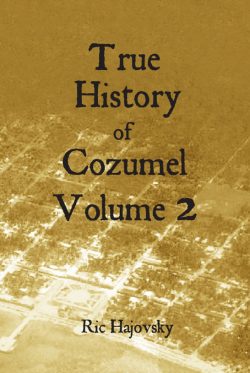 The chapter on the history of aviation in Cozumel is full of early images of weird seaplanes that have landed on the island and stories of how different Cozumel airlines started (and failed).  Did you know the origins of MAYAir go back to 1957, with a pig-hauling, mom-and-pop, one-plane air charter (Aero Cuahonte) in Uruapan?  Did you know that in 1988, their plane crashed while on a charter carrying an Israeli Mossad agent who was intimately involved in the Iran-Contra arms affair with Oliver North and had been talking to Bob Woodward in the weeks prior to the crash? There are just so many weird things about this event it would take a whole book to tell it all.

Another chapter has the locations, maps, plans, old and new photos, and the stories of 41 of the Maya ruin sites on the island, other than San Gervasio.

Another chapter focuses on Cozumel’s shipwrecks:  Those found but not identified, those identified but not found, and the story (with photos) of how Cozumel’s inhabitants were heavily involved in the “wrecking” business in the late 19th century.

Another chapter tells how the island’s lands were divided up and how the reefs and beaches got their names.

It can be read as a stand-alone book, but it is the sequel to volume 1 of True History of Cozumel, so reading that one first can give you an even better idea of how Cozumel came to be.