A myth born of mistakes, misstatements, and misunderstanding 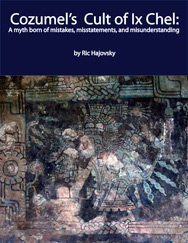 Twentieth-century, English-speaking researchers used translated primary ethnohistorical accounts or poorly paraphrased secondary sources as supporting evidence of a Cult of Ix Chel on Cozumel Island.   Later investigators relied on the work of these earlier researchers without questioning their validity and repeated the theories contained in them as facts.   A comparison of the original Spanish primary accounts against the theoretical models based on bad translations or paraphrased versions shows that the primary accounts do not support these theoretical models.  These published theoretical models and the misleading statements they contain helped create a false history that leads researchers astray.

There is an urgent need for a reexamination of the commonly held and widely published beliefs regarding a Cult of Ix Chel on Cozumel. This eBook offers a fresh look at the original texts and points out later writers’ mistakes in interpretation, erroneous statements, and fabricated details that led to the myth of Ix Chel and its unfortunate ramifications that we are dealing with today.